New Years Eve my cousin’s husband Jason’s contribution to the spread was a big old bowl of shrimp Ceviche. I had never tried ceviche before, but just eyeballing it up, I knew I had found another food love.

Whatever the serving size is for ceviche, I’m pretty sure I ate 3 times as much that night. Firsts, seconds, and then later on in the evening – thirds!!!

Flash forward to this weekend, they had a cookout over at their house. I was hoping so badly that Jason’s ceviche would make an appearance on the menu. But, having just flown into town, and feeling under the weather, Jason spent much of the night stretched out on the couch just trying to feel better.

I made it through the gathering without crying, since there was many other foods to be It took me one day to satisfy that craving. Today I googled and found many recipes, some with more of a tomato base, some made up with other sea-foods like fish, mussels, scallops. But I wanted the shrimp. That’s what was calling me. Not to mention, that’s what I have on hand. I found this recipe on Food Network and though I could easily work with it. A quick run to the Super Walmart got me the cucumbers, cilantro and extra lime juice I needed.

It took less than 20 minutes to throw it all together; we ate it immediately. I doubled the recipe and eyeballed most of the ingredients. The changes I made: 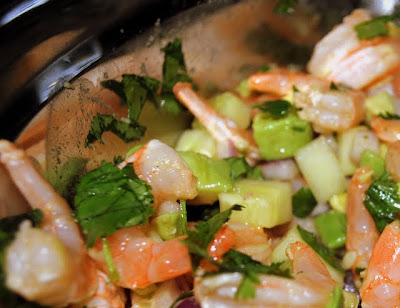 Yummy. Frank and I had two bowls, straight up. I washed it down with a Bud Light Lime. Mmm. Very good, but I have no craving whatsoever for it today. Killed it. Perfectly.