In making my Pumpkin Dump Cakes, I found myself continually amazed a the price of canned pumpkin. Nearly a dollar and a half for a small can seemed steep to me. Now that Thanksgiving is a little closer, I’ve found them for about .99/can, but, being the happy homemaker that I am, I decided to go through the process of preparing and freezing fresh pumpkin myself. I don’t even really know why I felt it necessary to go through, but I am a curious woman.

I wish I could remember how much my pie pumpkins were. I think they were about .99/each, but I really can’t honestly say. I’ll have to check the prices next time I’m at the store. My real experiment in this case was only partial cost-curiosity.

I decided that I would prepare my pumpkins in the crockpot rather than the oven. I got out my big crock to do this and quickly realized that they weren’t going to fit. I took the pumpkins out and left them on the counter. Days later I had a brilliant idea: do them one by one in the smaller crockpot. Aha! Momma didn’t raise no fool.

Since I have a habit lately of throwing things in the crockpot before bedtime, (beans mostly, to freeze and use) last night with nothing to throw in I looked at my two pumpkins. Plop! In went one.

I set it on its side, poured in about 1 cup of water and put the pot on low, brushed off my hands and walked away. 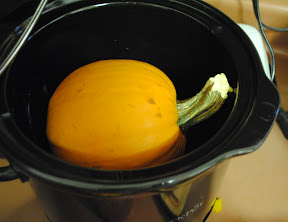 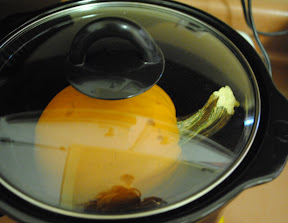 The next morning I have to say the pumpkin smelled pretty darn good. It was a nice aroma to wake to. Since it had been about 8 hours, maybe 9, I wondered if the pumpkin was ready. The outside didn’t get soft like I thought I would. A fork test didn’t work. A quick jab with a butcher knife didn’t work. A more forceful stab with the knife and I was in like slim. 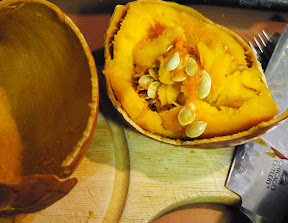 I didn’t save the seeds for this one. I probably should have, but I was lazy and not really “feeling” the whole pumpkin seed thing. If I really wanted to get my bang for my buck I would have, though. 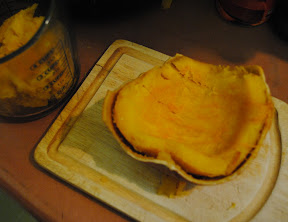 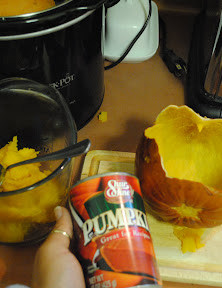 I took a stickblender to it after gutting it out to puree it, and then put it in the fridge. 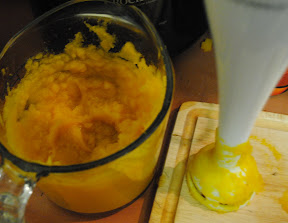 I’ve read you’re supposed to let it sit overnight to drain any liquid, and then you can freeze it. In eyeballing I’d guess there’s about as much puree in one pumpkin as there is in the can (or maybe 1.5 cans worth), but I haven’t confirmed that yet. Going to weigh it tomorrow and see if it comes out to 15oz. I suppose I’ll have to make some pumpkin bread with it, too, just to try it out yanno.

If I were making multiple pumpkins, it would have been better to just stoke up the oven, but this was an easy fix-and-forget method that I would definitely use again.