I remember reading about making homemade yogurt eons ago. Never gave it a try. Contemplated it. Had my mother tell me, My goodness, I made yogurt for you guys all the time when you were little. — No wonder I have this “granola” strain in me. Even though I’m adopted, I have this mutated homemaker gene. I see where I get it. Through the baked breads, homemade yogurts, creative playing, scrap-saving, able-to-whip-up-a-meal-from-the-pantry mother of mine.

Back to yogurt. A cruise around the web turned up many similar posts regarding making yogurt in the crockpot:

Obviously tons of people are doing this. Should be easy enough for a cavewoman, right? 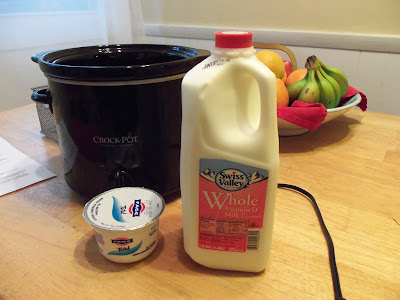 Whatever. The title, “first try” hints to the end result of my first experience with crockpot yogurt making.

See, when I’m meal-planning (which I was doing when I got the crockpot yogurt bug), like a good girl–  it is 7-something in the morning and I can tell you we’re having pork roast tonight and it is already in the crock– I also throw in some “fun” recipes/experiments to try. It helps take the sting out of balancing the checkbook trying to stretch a dollar and designing a menu around it. Supposedly making the yogurt falls under the umbrella of things you can make at home for cheaper. But can you buy sanity? 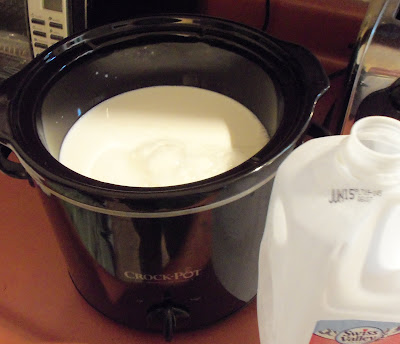 OK, it wasn’t all that strenuous, really. The recipes are nearly identical:

1/2 cup of plain yogurt (with live, active cultures – apparently this was a FAIL culprit for some?)

Unless your yogurt is a watery mess like mine. Then you do what we call in soapmaking a “rebatch” to not waste your ingredients (read “what to do if your yogurt fails” on Girl’s Guide to Butter). Mine failed. If I have to take a guess, I’d say it was because of temperature. Or, maybe the boys rammed into the cooler a few times as it was culturing, disturbing the process. Who knows. All I can tell you is, at 9pm I nearly held ceremony as I unearthed my homemade yogurt, children eagerly awaiting. The lid came off, my finger went in… and it was pretty much the same consistency as milk. Thin. Watery. Tasted like yogurt, though. I thought about just having it as a drink like kefir(ish), but changed my mind.

Instead, I plugged the pot back in on high for a half hour while I ran to the store frantically looking for cheesecloth, chocolate (and some other stuff).

By the time I got home (1/2 hour or so), the curd was separating from the whey. I strained it using coffee filters (it took me a run to the store to remind myself that I had coffee filters– perfect for straining things like this, and at no additional cost). 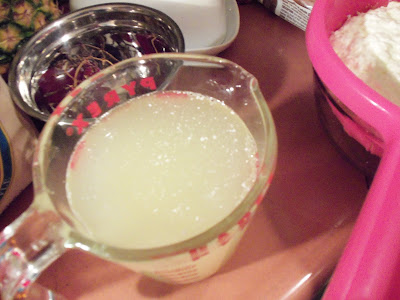 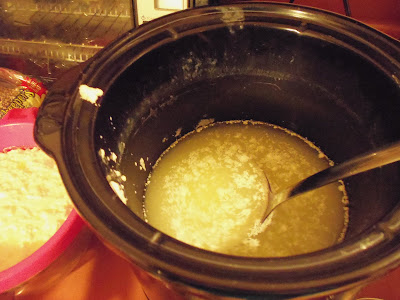 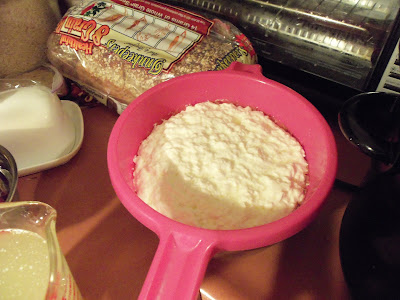 After straining, I mixed on part of the ricotta-ish product with some vanilla and sugar. Fine for spreading on a bagel. The rest covered and left to strain overnight. 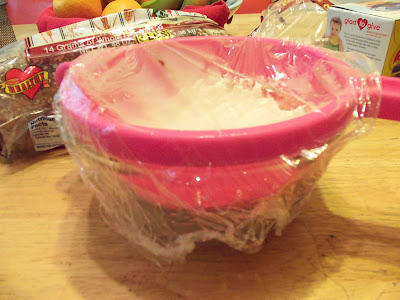 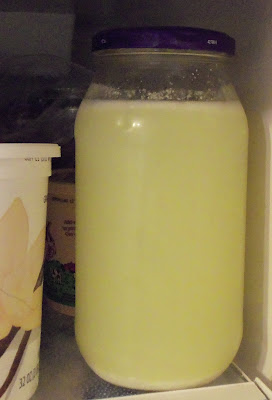 Whatever can I do with the leftover liquid whey, you ask? Well, I used it to make soap after making paneer and yogurt cheese. Made a nice soap. But you can also (apparently – I didn’t try all this):

I’m wondering if it would be good for hair or skin, like in a bath or as a rinse (hair)? But I’m always thinking of hair and hair rinses.

On to try two…

5 thoughts on “Making Yogurt in the Crockpot – First Try”