Yesterday was Frank’s birthday. 42nd I think. I’m getting terrible with these things. Nevertheless, it was a birthday, and we celebrated it. In our house, the birthday boy (or girl) gets to choose a dinner (in or out). Being that I was working yesterday, I really tried to steer Frank in the direction of eating out. We started with the possibility of creating a menu, and I immediately grew exhausted. After a few emails back and forth, dinner out at Buffalo Wild Wings was the plan.

My husband likes chicken wings. Seems like every year we end up at some wing location for his day of celebration.

I did wonder about the cake. As I pondered this on the way home, I planned. I knew I had some cake flour at home. I’d whip up something. I thought about making one of Jack’s Chocolate Cakes. I had no mayonnaise. White cake? No… what to make, what to make? My mom usually makes Frank one of her apple spice cakes with cream cheese frosting. That’s it! I have a HUGE bag of carrots in the fridge. Mission Carrot Cake begins.

I checked out allrecipes.com and went out on a limb with the highest rated recipe for carrot cake called Best Carrot Cake Ever. I know. Risky rebel that I am. I saw the ingredient list and had mostly everything on hand. My mission began.

Some of the comments on the allrecipes.com website mentioned the cake being “pudding-like” which scared me, so I read a few responses just in case. If you decide to make this cake, do these two things:

1.) Soak the raisins. Bring water to a near boil on the stove, shut it off; add raisins.

2.) Drain most of the liquid from the carrot/brown sugar mix before using it. Drain the pineapple, too. Maybe that’s three things. Oh well. I put my pineapple in a colander and let it drain for a good 15 minutes during prep. time.

Other than that, this is a recipe that works. I didn’t even substitute anything. Well, I subbed the white sugar for granulated cane sugar, but that’s not a biggie.

As I said, I was on a mission. So much so that when the birthday boy came home from his hard day at work, I immediately sent him to the store for cream cheese and pineapple. Pathetic, no? I felt bad, actually, after he left. I realized I hadn’t even looked him in the eye, said hello, gave him a kiss or anything. I focused obsessively on my cake preparations and missed the whole point all-together. A habit that needs breaking.

You know those recipes that you make that totally fill the house with a smell better than any scented candle will give you? This was one of those. It. Smelled. Divine. I whipped up the frosting (1 stick butter, 16 oz. cream cheese, 1 tsp. vanilla, 2c. sugar) and put it in the fridge. After de-panning the cakes and putting them on racks to cool, we went to dinner. Dinner was good. Loud. that place is loud. But good. Our whole family was there, which is the best part. As they grow older it becomes more difficult to get everyone together in one place. Full and sassy, we came home to the yummy-smelling house and I frosted the cake. 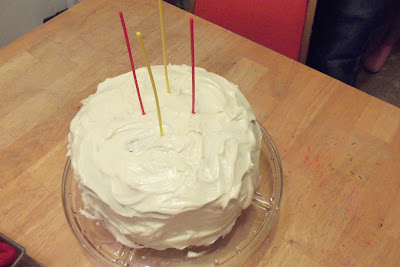 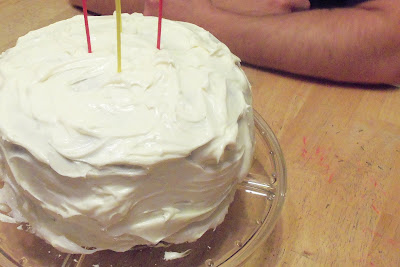 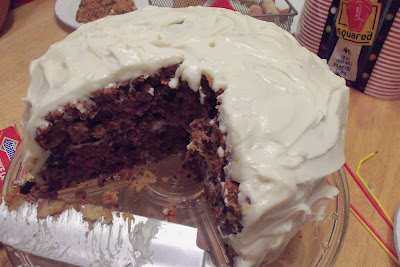 So good. One of those instances where a thin slice is all you need. 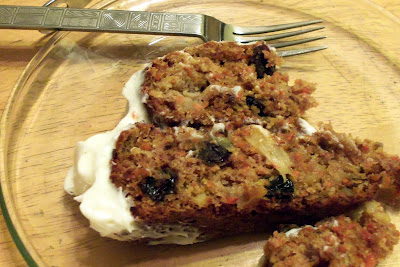 This recipe was a definite keeper. Better than store-bought and totally tweakable. The only problem is that I have an entire half a cake left and very little willpower. Cake for breakfast. Cake for lunch. Seriously, this cake’s calorie count you don’t even want to know — especially with that frosting. Which is why, immediately after publishing this post, I’m going for a walk. See ya.

3 thoughts on “Happy Birthday To Frank”