Because, if I’m going to gain weight over the holidays, I’m taking you all down with me. Only addicts drink eat alone, so they say. 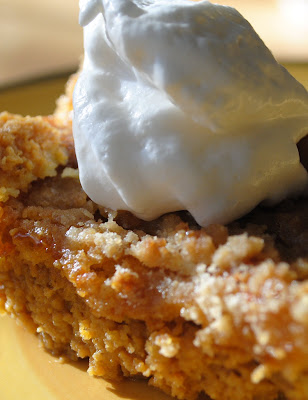 I’m sharing the fact that I made this, but it is not my recipe. It is all over the internet, though and I don’t know how we’ve never met, Dump Cake and I.
I’m also sharing the fact that you can’t judge a recipe properly if you’re a pig that dives into it very quickly after removing it from the oven (my kids and I did this, yes we did). Right away I was not terribly impressed. Too sweet, pumpkiny and just not very good. I chalked it up to it being an easy recipe.
And then I tried it again the next day. Can you say entirely different opinion? Momma’s taking this badboy to Thanksgiving. If I had to tweak it at all, I’d say don’t be afraid to pack in the cake mix nice and firm. But that’s about it. OK, not really. I had another thought – chocolate cake mix. That sounds super-dee-duper good, but who knows it might just be one of those things that sounds better on paper. If you try it, lemme know. That is, if I don’t try it first. Just remember, this is a good make-ahead cake.
Doesn’t look to special out of the oven, does it? More like a potato casserole or something. Hey kids, want some potato casserole? (Snicker) 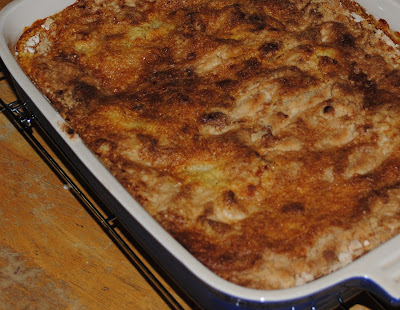 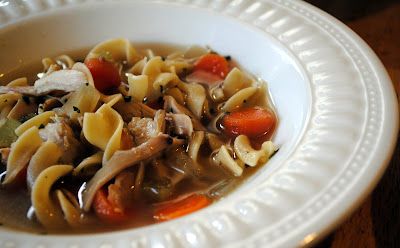 Today I voted.  Frank and I went to the polls together.  There weren’t any lines.  It surprised me that they don’t check your ID.  My goodness, it’s more difficult to check out a book at the library than it was to walk in and vote.  I’m not sure if that is a good or bad thing.

Even if politics as a whole leaves a sour taste in my mouth, it always feels good to be part of the process.

It will be nice to not be inundated with horrific political ads, for a while.

Tomorrow is my regular day off.  Work has been extra busy, and I was asked to come in for more hours, so I don’t know how much I’ll be able to get done tomorrow, but my hope was to get some meal-planning done, get some bills paid, balance the checkbook, clean.  Tonight was kind of a hodgepodge-lodge for dinner.  I had a bowl of noodles, Frank had a Hot Pocket and pizza.  The boys ate some homemade Boyardee-ish, finished off the pizza.

This recipe tastes similar to the store-bought noodles with sauce, but is much cheaper.

Directions:
Boil and drain the noodles; return to saucepan. Add can of soup and heat on med-low. Add slices of cheese, one at a time, and stir until melted. Remove from heat and enjoy!

Today I embark on a month-long journey of daily posting. Quite a feat for someone who posts sporadically, dusting off cobwebs from my WordPress Dashboard every now and then.

But I can try.

Today I am recovering from yesterday’s dosing of over-indulgence. It was a fun time had by all, but when Halloween falls on a day before school, we’re a little less than perky the next morning. Surprisingly the middle-schoolers were up and out the door on time. They have the earliest start to the day (not including Frank). They trusted me enough to stay home with their candy, too, silly children. Actually, it was quite safe with me. As my newly dropped pant size becomes snugger on me, I am sharply reminded that candy thievery is not within my best interest. Unfortunately, fatigue often launches me to a nearly insatiable urge to munch continuously. Thank goodness I had some Lean Cuisines on hand. I allowed myself 3 small candies, and that was it.

And then I allowed myself to scarf down the remainder of my Ben & Jerry’s Oatmeal Cookie Crunch. I guess it is OK if I can get myself under control. Starting tomorrow.

In continuing a more responsible way of meal-planning and preparing, tonight’s dinner:

2 bags of Trader Joe’s (Trader Mings) Orange Chicken prepared with 1 bag of frozen stir-fry veggies t0 stretch the servings a bit further and add a bit of veggieness to the meal. The entire family really likes this chicken. I serve it with a side of long grain, white rice. Pretty decent, if you figure I can feed 6 people dinner for less than $10.