My goodness the mosquitoes around here are atrocious. It is nearly impossible for me to water my plants. I have one hand on the hose, the other swatting away swarms of the nasty little vampires from my arms, face, legs, neck… It is miserable. My lackadaisical days of planting peppers, tomatoes, lettuce and spinach has turned into frantically watering 2 tomato pots (1 is near looking pretty badly) and 2 pepper pots. It is not enjoyable.

In years past, the mosquitoes have been the same. Horrendous. People come to the door, ring the bell and you can see them flailing their arms in a loose attempt to keep the bugs away as the wait desperately for someone to answer the door. It is comical and guilt-ensuing at the same time. You wait a beat, watch and stifle a giggle, then open the door and shoo them in, the poor things.

So I’m thinking of spraying. We are prisoners in our own home, unable to enjoy the outdoors at all. I worry about spraying, the chemicals, yadda yadda, but I still contemplate spraying. It is either that, or hovel in the house most of the day or waste gas driving to areas of the city where the mosquitoes are more sparse.

Anyone else succomb to spraying?

(Side note – we had/have an electric zapper. Doesn’t work.) 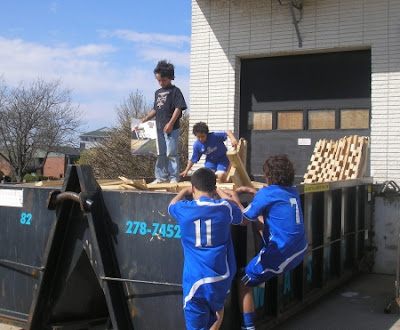 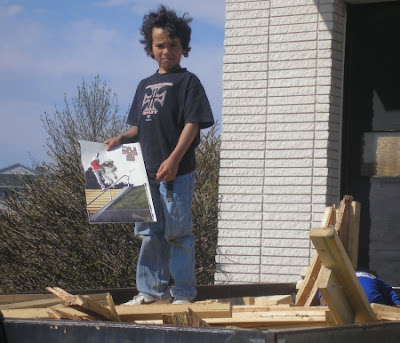 Skateboard shop closed down; they wanted to check out the dumpster. Ooh adventure. Walked away with nothing. Franny found the ripped poster, but later thought it might be dirty and left it.

Got this in a FWD at work; thought it a nice parable.

A holy man was having a conversation with the Lord one day and said,

The Lord led the holy man to two doors.

The people sitting around the table were thin and sickly. They appeared to be famished. They were holding spoons with very long handles that were strapped to their arms and each found it possible to reach into the pot of stew and take a spoonful. But because the handle was longer than their arms, they could not get the spoons back into their mouths.

The holy man shuddered at the sight of their misery and suffering.

The Lord said, ‘You have seen Hell.’

They went to the next room and opened the door. It was exactly the same as the first one. There was the large round table with the large pot of stew which made the holy man’s mouth water. The people were equipped with the same long-handled spoons, but here the people were well nourished and plump, laughing and talking.

‘It is simple,’ said the Lord. ‘It requires but one skill. You see they have learned to feed each other, while the greedy think only of themselves.’