This post is about coupons, Walgreens and Register Rewards.

I haven’t been to Walgreens for a while. My obsession with that store goes in waves. It begins with a some good deals, sheer excitement. Register Rewards, sales, and coupons that stack up to fantastic savings. I feel rich, high, excitement! I’ve made multiple trips to the stores, stocked, stacked and multiplied my savings. The week ends with Rewards still in my hand, armed and ready for the next week.

There is nothing. No sales, no excitement, nothing to add to my bounty.

Followed by a week where there looks to be some good deals, but since I don’t stand on Monday mornings, waiting for the store to open, all the stock is gone (or worse yet, there WAS NO STOCK on the best deals). I run my triangle of stores (they are close, so I’m not wasting too much gas, just time and sanity) and leave empty-handed. I’m furious with Walgreens, and tell myself I’m done. I’m hanging up my Walgreens monthly coupon book, Register Rewards and I’m not checking any blogs to see what deals are steals this week.

And I don’t. And then I find the expired Register Reward in my purse a week later, and kick myself for snipping off my own nose to spite my face.

Not  all times does my lag in Walgreens visits begin and end in the scenario above. Sometimes I am simply too busy to clip, watch, and save. I miss out on deals, my coupons expire. It happens. This week, however, with wrestling season officially behind me, soccer season yet to start, I had more time. My stash from last fall is dwindling. The deals matched my coupons and my mood. I made a Walgreens run. 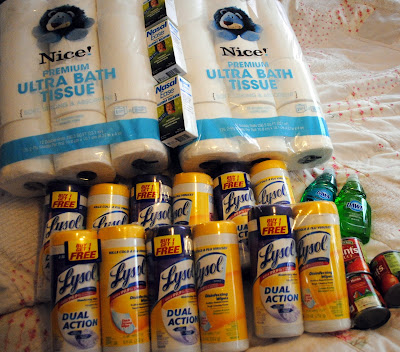 My main stash-dwindling issues are pictured: toilet paper, disinfecting wipes, dish detergent. The NasalEase was the deali-o, the tomato paste a filler.

Not bad. Not bad at all.

I’ve been couponing. I’m not even gonna lie. I know I mentioned it before. I’ve been blogging local (and non-local) deals outside of this blog, simply because I don’t want them cluttering up this one so much.

If you’re a couponer running a Mac, this may apply to an error you are getting (/usr/libexec/cups/filter/CouponConvertor_v2 failed). If not, disregard. Carry on. I’d been getting errors lately when trying to print my coupons, but found a fix, thank goodness.

I’m happy now. Although, I’m a bit concerned that my recent printer purchase could have been avoided, which makes me a NOT happy camper. Sigh.

… just a dash of sarcasm.

Well at least my washer waited until I had the majority of my wash done before it completely broke down.

I’m trying not to be bitter, angry, sad or whiny. It doesn’t always work that way. I don’t know if it really is true that when it rains it pours, or if when it is pouring out you just take more notice of each, fat drop.

Lots of fat drops going on right now. Good, bad, normal… it’s all a part of life. Sometimes it just gets more difficult to cope with it when it continues to hit.

Yesterday I said “goodbye” to my parents. Not that I won’t be seeing them again, but we just won’t be living in adjoining zip codes. My father retired from being a pastor; my mother retired from a lifetime of lab work at the hospital. Somehow I thought it would happen around the same time, but not literally within the same week. Since my father was a pastor living in a parsonage (the church’s house), they moved. Not to another time zone, but another area code, hours away. A sad, but still somewhat exciting adjustment. Emotions.

My boss, a pastor, was recently assigned to a different church. 6-weeks notice, and her “going away” day was the same as my father’s retirement party. Again, sad, but exciting. A new boss means new experiences, and hopefully ones I can learn a lot from. Emotions.

My oldest son is taking off on a trip a couple states away for a camp. Quite an honor and exciting adventure. Teenaged angst and personality. Emotions.

My daughter, almost 20, continues to make life choices that are difficult to stomach. Emotions.

Searching for something predictable, I have found some joy in couponing (again). Not stockpiling like a freak whose stash will expire before making a visible dent. Not like that. But… like, going to Walgreens with a plan (researching a few sites– probably too many, printed coupons), saving money on items and walking away with a load of good stuff and not a bunch of money spent. My second trip (yeah I said it) was the best because I totally stacked coupons and got some stuff for cheap-o cheap (4 body washes for the boys who use them like crazy, pantiliners, a few other goodies). I like to know I’m getting a deal on things and am stocked up. I can see how some people go insane with it. Eh.. sort of.

My mother was a couponer. She had a tin recipe-card holder with her coupons filed in it. She was a SENSIBLE COUPONER long before there were shows about people with Coupon OCD. I guess I learned from her. That makes me smile. My ability to scrape together a meal from what seems like nothing, and my coupon skills are both from mom. And I’m adopted. Monkey see, monkey do.

So anyway, I also made out of Target saving more than I spent (go to Target.com and scroll to the bottom, click on the “coupons” link). That is a cool feeling. Contact lens cleaner, Colgate toothpaste, Crackerful crackers, 2 Dove deodorants, pens (for .02!!!), more pens, travel-size Tide, more pens… all for $10. The contact lens cleaner itself was $8 originally. I felt like a bandit. They let you stack coupons. So, for example: Contact cleaner $7.99 originally, Target has $2/off coupon, I also have a $1/off manufacture coupon — I get to use both for $3/off. I purchased everything by stacking. It does take time, but for me time is money and this is money worth working for. 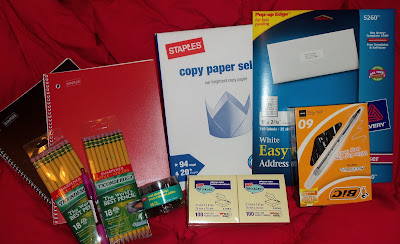