Tonight I made Lootie’s favorite soup: Italian Sausage Soup. He requests it on his birthday, and on other random days. It is a simple, tasty comfort foot that I don’t mind making at all. I can nearly make it in my sleep. Since I was grocery shopping, I picked up the ingredients, except for the broth, since I had that at home, and a crusty loaf of Italian bread – the perfect compliment.

As I cooked the sausage and sliced the potatoes, adding it all the the pot with little bit of salt and red pepper flakes, I had a moment of panic. Is that IT?! Was it really this simple? Am I forgetting something?

I ran into the computer room to search my site for the recipe and found it: Olive Garden® Zuppa Toscana Soup. It was in the archives from 2004. The recipe (a photo) was missing. Tragedy. This is a VERY yummy soup. I must repost it.

This is a homemade version of the Olive Garden® Zuppa Toscana/potato and sausage soup. And honestly, it’s actually better and super-dee-duper easy. 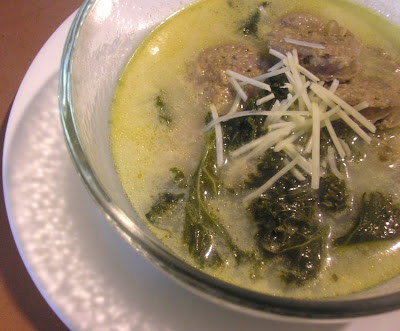 Here’s the exact recipe I have written down, with my subs in parentheses:

Prepare the sausage by placing in skillet with 1/2 cup water. Cook on medium for 10 minutes, then uncover, turn and cook for 10 more minutes. Cut into medallions. If you use bulk sausage, brown it and break it up into chunks.

Simmer for about 1 hour, stirring occasionally. Garnish with some shredded Parmesan and serve with a nice hunk of bread. This soup is wonderful the next day and freezes well.

Carlito started refereeing this year. He’s been wanting to be a referee about half as long as he’s been walking this great green earth, waiting to turn 12 —  eligible to take the class and exam. One year for Christmas we purchased him a full referee kit, complete with yellow shirt, black socks, whistle, cards and shorts.

He likes order. He likes rules. Why yes, he would like to be a police officer. Above all, though, he likes money. The way it smells and the buying power that comes with it. He hasn’t earned the nickname “Crabs” for nothing.

We weren’t sure how the whole “class and exam” thing would pan out earlier this year when we enrolled Lootie. It is a $70 fee for class and licensing. We made it his birthday present. You go for like 4 or 6 hours, two weekends in a row. Maybe it was 8 hours? At any rate, Frank and I were both nervous. Lootie’s got some learning issues that make it difficult for him in school, so our fears were slightly increased as to how the exam would pan out in the end. Dante did the class a few years back and did fine, so we were hopeful but still incredibly nervous, using our sarcasm (in private conversations) to work out our jitters.

All the worry was worth it (haven’t let go of the sarcasm). He passed the first weekend with a 98%. The second weekend was the same. Oh the pride and satisfaction on that kid’s face when he got his patch was worth the seventy bucks.

Before he was even assigned a game, he plotted out his evil plan to rule the world —  I mean to purchase an Xbox 360

. (Long ago I told the kids I would not purchase any more video anything — they’d have to do it.) Boy, can you motivate that kid with the fresh — or dirty — scent of green.

He’d yabber about it constantly, how he was going to buy it, who would need to pitch in (not only does he enjoy his own money, but he enjoys capturing his younger brother’s money — Franny’s not game to his ploy, but his game-nerd brother Sal sure is).

Lootie almost blew apart – literally, spontaneous combustion – when his first ref game was canceled due to lightening. He would have rather risked being fried to a crisp if it meant he’d have 15 hot bucks in his hand.

As the season continued, he get a few games in, but his big money-maker was to referee a recreational tournament that would push him over the Xbox edge. Who knew his appendix would decide to rot to pieces and burst two days prior? Is it OK for the referee to run the field with one hand on the IV bag and the other on a whistle?

Lootie and Sal the resident “game nerds” of the family (not a mom-given title, but accurate none the less) put their money together and purchased their Xbox. Lootie, no joke, treats it like a newborn. Exasperated– Please, please, don’t leave the games out like this. Oh look at this!! Doesn’t anyone know how to treat something with respect around here? Don’t do that… Cord goes like this just so, not the way YOU guys did it. Running up the stairs after school, first glance at the Xbox – Franny, did you play it? Did you? Oh my GOSH. Look at that? See. Nobody takes care of things… (obsessively checks cords, power supply, game locations).

Yesterday he had another game to officiate. As we pulled up he begrudgingly left the car. They’re all GIRLS (grumble, grumble). I think it was for show. He had to check his eagerness at the door.  Inspects the field, checks in with coaches… then gets to business, asking for his money. One coach gave it up easy; the other one Lootie had to stalk, and stalk he did, for the remainder of warm-up time.

It was a cute game to watch. Little squealers chasing the ball. Loo did fantastic with his whistle and commands, taking charge in a manner conducive to his personality. I think he fondled the money in his pocket multiple times during the game. Once he was hit with the ball and he smiled, casual and relaxed, continuing seamlessly. Another he slipped, fell and went on without apparent embarrassment. A spunky player gave a girlie scream (for no reason) and he looked at her as one would at a younger sister – with disgust and affection. He really has a knack for refereeing.

Game over, he came to the van and glanced out the window, back at the field. “That was fun. I liked that. They were fun.” And then he carassed his money.