I love toast.  Growing up breakfast was toast.  Or eggs and toast.  Cereal, oatmeal… but probably with toast.  My mom would also serve up homemade bread, which took toast to a whole new level.  So, sometimes our snacks were toast.  Not only did I eat it, but I have memories of my mom sitting at the table with her coffee and toast; lots of them (memories, that is).  Her sacred toast time.  Similar to tea time, but with toast and coffee.

We ate good bread.  If not homemade, we had wheat.  Generally the “better” wheat bread, that toasted up crunchy, chewy.  I like mine almost a little burnt.

Years went by and I still eat toast.  I buy bread, I baked bread.  In the last few years, however I found that when I make homemade wheat bread, I walk around feeling like a belly full of air for a while.  Air surrounded by a brick, actually.  So, I stopped making my homemade wheat bread and started crying.  Not really.  Maybe a little, inside.

I still buy bread, in fact, our favorite toasting bread comes from Costco and it’s called Alpine Bread, which you can find right here.  It is literally THE BEST TOASTING BREAD I’ve ever had.  My son’s girlfriend eats it when she comes over, and now asks me to get her a bag when I go so she can take it back to her dorm.  I’ve only found this bread at Costco, and it’s worth my membership.

Back to the whole point of this post.  I have had to cut back on bread.  There it is.  For many reasons, I just can’t consume it like I used to without paying a price.  I’ve made low-carb breads and muffins, but what I miss the most if I’m not allowing myself bread is toast.  It’s an easy, tasty breakfast.  It dips well in eggs.  So, I’m always looking for alternatives, and this one (sweet potato toast) was mentioned by one of my cousins.

SWEET POTATO TOAST
Wash (don’t peel) a medium-sized sweet potato.
Cut it in rounds (I did length-wise, afraid I’d lose the rounds in my toaster).
Pop it in the toaster for a few toastings (mine were thick and I think it took five).
When it starts to brown up a bit, it’s done.
Top with whatever you normally top toast with.
Mangia! 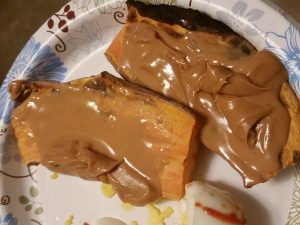 That’s it.  Verdict so far from me is that it’s an interesting alternative.  It definitely tastes like a sweet potato, and doesn’t have the texture of toast.  But I think in experimenting next time that I’ll slice it a bit thinner to see what that does to the texture.  It’s an intriguing idea.  I’d love to have an alternative option in mornings when I’m needing to cut back on bread.  My biggest concern is the waste.  One potato made two slices for me, but there was half a potato left to rot.  This makes me wonder what would happen if I made a “batch” of toast, and then put the leftovers in the fridge to re-toast and crisp up when I need them.

I’ve been using Crest White Strips for about a week now. I should restate that. I’ve successfully completed approximately 7 days (2x per day) of the Crest White Strip regimen. They were not all back-to-back, however. I notice that I’ve had a headache on most every day that I’ve used them. Correlation? Maybe. I believe it is because of a very sensitive tooth that I have on the left side of my mouth. Possibly.

I do notice a difference in my teeth. Not dramatic, but definitely a bit brighter.

I have no trouble getting the strips on my teeth, as some reviews I’ve read. I did have one strip that left the gel behind and was rendered useless. Also, when I have the strips in my mouth, I spit. I don’t swallow my saliva for a half hour. Maybe it is weird, but I really don’t want that gunk in my tummy, just as I don’t want toothpaste or mouthwash in there either. I don’t need a whitened tummy.