Just before Thanksgiving I was listening to talk radio (local) and people were calling in on a casual discussion of listener’s Thanksgiving menu choices. I listened, hoping to catch an idea for something new and different to add to our menu. Since I was in the process of driving around town running errands, whatever “new idea” sparked my fancy needed to be something very, very simple that I could retain in my brain until my next stop so I could write it down.

A lady called in and gave a recipe for a family favorite, “Sounds kind of grouse, but everyone loves it,” she said.

Prepared Cranberries
Small carton of Cool Whip
Sleeve of Saltines (crushed, or not)

I figured – why not?

I doubled the recipe. I made cranberries by taking 1 bag whole berries, 1 cup sugar, 1 cup water (directions were on the bag), boiled, smashed, cooled. 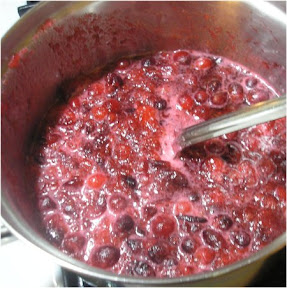 This I layered with the other 2 ingredients, then covered and put it in the fridge overnight (the lady on the radio recommended this). 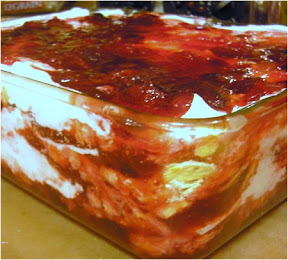 I did not like it. I think if I had used pound cake or even bread instead of the Saltines, I would have been OK. But the Saltines rendered a texture and taste I wasn’t fond of. I was hoping for the “sweet, salty, cake-like melding” that was spoken of on the radio, but it turned out with a texture of something in a day-old lunch box – to me. Everyone else seemed to like it.

It is a simple base idea, though, that could be used with another fruit (blueberries) or, like I said, a bread or cookie instead of the Saltines. So, though I might not make it exactly like the recipe says (or if I did, I would make it for a potluck or something), I will keep it in my “back pocket” of tricks to use creatively another time.