Nine weeks ago Franny was hit by a car while crossing the road after getting dropped off from the school bus. He was fine, save for his broken leg, some fractured foot bones and a bad wound on his foot. Today is he had a check-up.

Initially, he had surgery to clean and repair his injury and started with a fixator for 5 weeks (which was removed an replaced with a blue cast about a month ago). Today the cast was to come off for x-rays and then either a walking boot OR another cast. We’ve been discussing cast color for a couple weeks and the color was green. IF he got a cast. He was hoping for a boot. He was very nervous about the cast removal, but also very interested and excited. 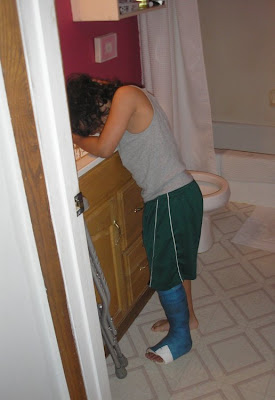 Getting dressed and ready to go. 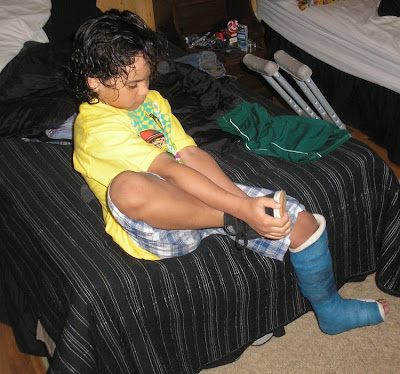 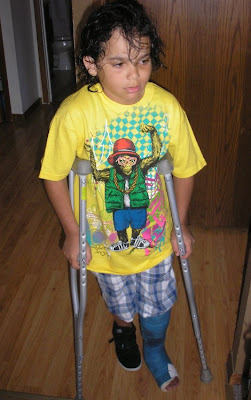 I packed the pain meds, just in case, and his brother’s PSP for distraction purposes.

We stopped at McDonald’s (per Franny’s request). He got a McGriddle, while I picked up a chicken biscuit (one for me and one for Frank who was meeting us at the clinic). I was so nervous I couldn’t eat, though. After Franny’s cast wedging experience, and his own anxiety over the saw, I was a wreck. I didn’t want him to know that, though.

We were familiar with the man who removed the cast. He made Franny’s first splint and came to the room once when Franny was in the hospital. Today they were set to have their Child Life Specialist come in and talk to Franny before his cast removal, due to my phone call the day before, but by the time they made it in the room, Franny’s cast was off. The cast guy was aware of Franny’s concerns and reassured him that it would take less than 2 minutes to cut and crack it. Franny had worn headphones and played his game.

Franny loves for me to take pictures. He actually asked the doctor if pictures could be taken during surgery (the 2nd time he had surgery). 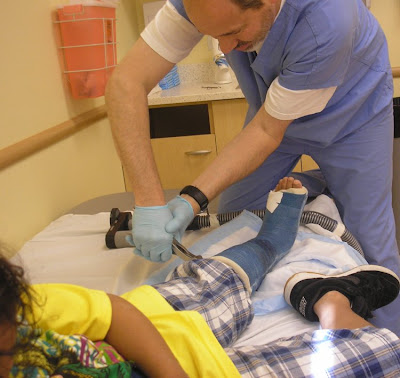 The saw is lying across the table. He cut down both sides and is using the tool in his hands to split/separate the cast. 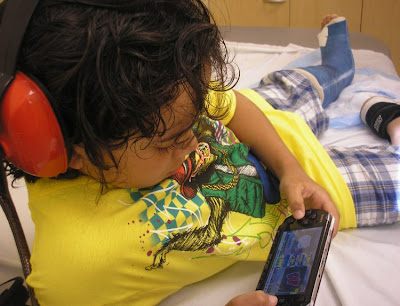 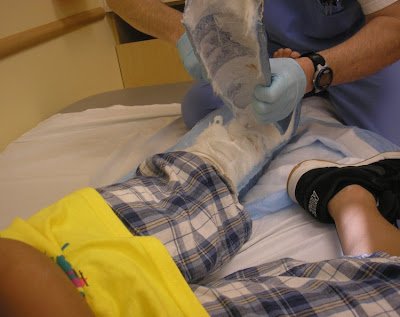 You can see a little blood/drainage. Does it ook you out? We’ve seen way worse (like the day of the accident), so it didn’t shock us. When the rods were removed from his leg, they blue cast was put right on, so any blood or drainage was going to be inside the cast. Don’t worry, I won’t show you the inside pictures.

His leg, to us, looked great. Last we had seen it, there were 4 rods, dozens of gooky, pussy stitches, swelling and an ugly blister. Most of the scabs from where the  stitches were was gone, blister was removed in surgery. The holes from the rods were closed. His leg was not really visibly much different from his “good” leg, size-wise. It was a beautiful thing to be able to feel and touch his leg, his foot. 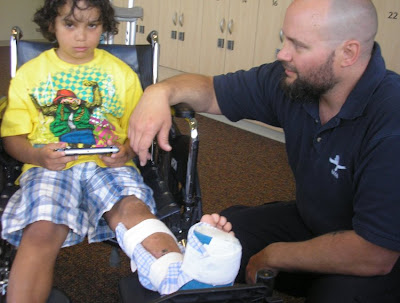 As he sat in the waiting room for x-rays, he wanted me to touch his leg. After the x-rays, while we waited, he just stared at his leg, at my hand moving across his skin, his shin,  foot, his ankle. The things we simply take for granted… I miss the simple act of washing his foot while I did his pin care. It was as if it was a sacred moment for us. Just as it was sitting in the examination room, quietly running my fingers over his scars, his healing bones, his traumatized foot. Priceless. 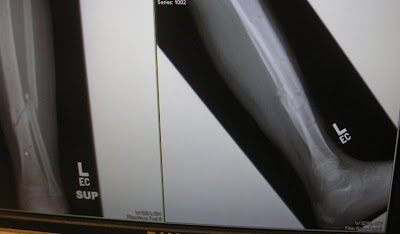 The news of having to have another cast put on was disappointing. Franny was SO much hoping for a walking boot, and he told the doctor just that. “But Francesco. You can walk with this cast. You’ll get a cast boot so you can. We want you to walk on it now, as much as possible and without crutches. This will help your bone heal and grow.”

This changed his perspective. He went over his color choices again, deciding on orange with some green striping thrown in for good measure. 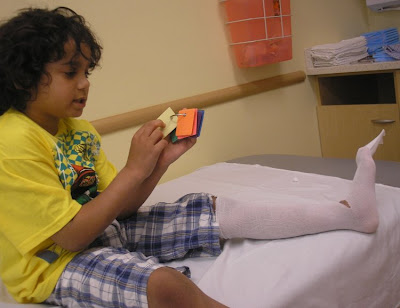 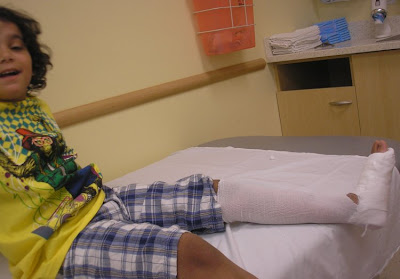 As the cast technician prepared his leg, Franny asked a million and one questions. What are you doing? When will you put the color on? Do you like doing this? Do you get paid good? You DO?! How much do you get paid to do this? (pause) I might want to do this… cast tech. might be my job. I don’t know, but I know I want to work in a hospital. After an assault of questions that came too fast to answer, the technician smiled and asked him to be patient and just watch. And watch he did. 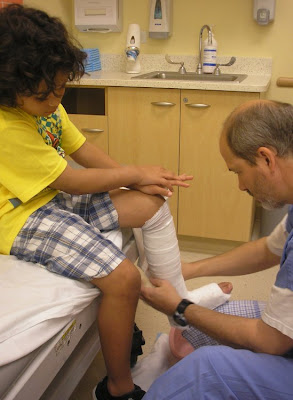 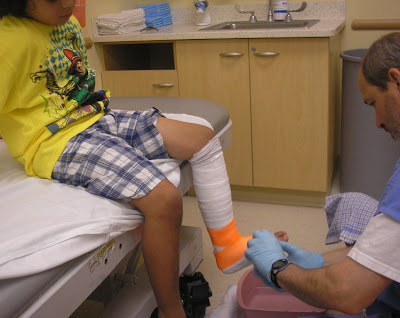 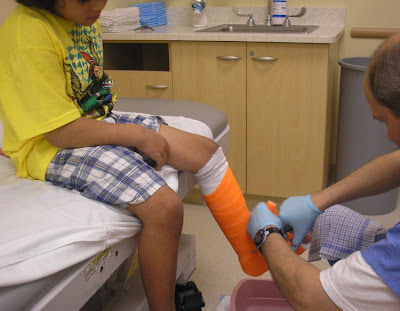 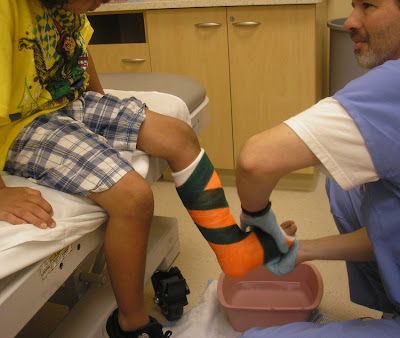 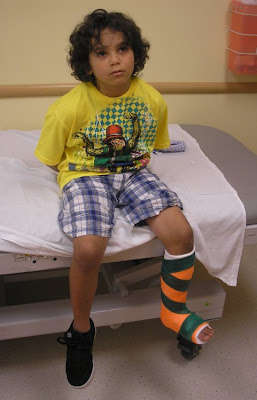 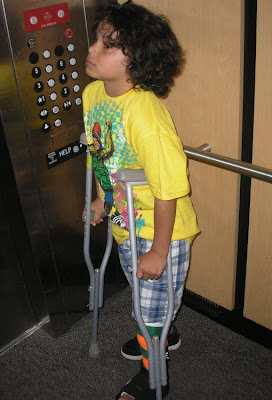 He’s slowly getting accustomed to putting a bit of weight on his foot. Two crutches, one crutch… standing with no crutches. It will take a bit of time for him to be comfortable with the boot and simply walking. As disappointed as he was with getting a cast, it was a good experience for him go through the process of having a cast being put on. Last time he was in surgery, going to sleep with a fixator and waking up with a cast. This time he got to witness everything from start to finish, and since he’s interested in orthopedics, he’s got a front row seat. I think everyone in our family has been learning and growing through the struggles of the past couple months. It is good to see Franny take something traumatic and make good of it, as much as he is able.

3 thoughts on “The Second Cast Change”