Possibly in other cities seeing this parked in the lot would be… weird. Here in Madison, Wisconsin– it’s normal. 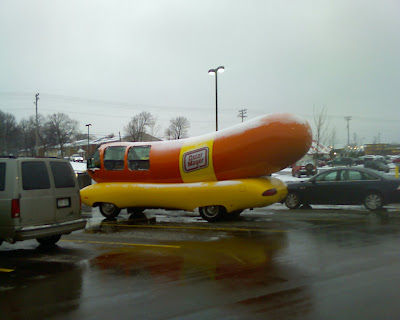 Funny story. We had family over one evening, Frank’s cousin, husband and their four young kids. Two of the  kiddos immediately ran off to play with our bucketful of cars. They would scamper in to the kitchen where we sat, brining cars to ask uncle Frankie about them.

Spidey-mobile, Frank told him for one. Another was a police car. Third time he comes in with our mini Wienermobile.

Why that’s the Wienermobile, replies Uncle Frankie smiling at the peculiar, but familiar vehicle.

The little boy looks at it, curiously. Turns it around, contemplating it. It’s a wiener? It took a few seconds for us to realize that not everyone sees a wiener-shaped car, and not everyone calls a hot dog a wiener.