Every year the church where I work hosts a turkey dinner. It is a big undertaking. Not so much for me, but for the people who volunteer and work up to the event, slaving the few days prior. The day before (Thursday) the event, the smells start wafting up to my office. This year they baked some pies. It took all of my strength not to run downstairs and belly dive face-first, sliding down the table, collecting freshly cooked pies in my mouth.

By Friday, they were cutting onions, carrots, celery and throwing turkeys in the ovens for dinner later that day. The building was abuzz with doors opening, closing, kitchen help in a flurry, answering phone calls asking about the dinner. The aroma was phenomenal. Something about the scents of Thanksgiving… turkey, stuffing, potatoes, sweets, cinnamon, coffee. Contentment. Can you smell that? Is there a scent for love, joy? Sharing, thoughtfulness, love, and food, all wrapped up in a beautiful package. I think so.

That day, I was able to close my eyes, and imagine it was Thanksgiving.

And then something started to burn downstairs. I don’t know what it was, but once that smell hit my nostrils, I couldn’t get it out and it kind of ruined the whole happy-smelly thing. Once that happened, I started thinking about church dinners, potlucks… Old ladies at home making jell-0 while dozens of kitties prowl the counters, young mommies and their toddler “helpers” forming cookies with snotty, fecal-stained hands. This followed by me imagining myself post-dinner at 2 a.m., jolting up from a deep sleep to make a beeline for the bathroom to bottom out the partially-cooked meat ingested hours before.

I think too much. Once the scenario starts, it is hard to stop until it runs the course, and now I’ve subjected you to it. Pity.

Getting back to the original thought. As I worked in the office, discussing work-y stuff with my boss, in popped one of the faithful church ladies. Not uncommon is it for a church lady to pop in the office, of coarse. But, uncommon is the Turkey Dinner event, the buzz of ladies cooking, the smells of the pies and turkey, and then a dear, pleasingly plump church lady appearing in the doorway, donned in a festively campy turkey-print apron spread across her belly.

It caught both myself and my boss so off guard, that a few seconds into the church lady’s question, we both started giggling, the pastor and I. So much so that an explanation was due, and then further to explain that it was not her we were giggling at, but the apron. I think she finally got it, but I wasn’t quite sure. All I knew was that I had a deep desire to have a turkey-print apron for myself.

After fulfilling the church lady’s request for a couple of craft sale signs, I brought them down to the craft tables for them to display. The ladies were all donned in a version of the homemade Turkey Dinner apron. The cheesiness was overwhelming. Giggles bubbled in my throat; my desire for the apron grew. I set the signs down near the craft items, and briefly scanned the offerings. I noticed noting in particular, except… is it? Why yes! One, solitary, turkey-print apron waiting to be priced. My primal reaction was to grab it, beg an early sale, write a check, and make it my own.

Um. Yeah. That kinda goes against my mission not to impulse buy. Purchase the necessary and the rest can wait.

Maybe the apron falls under the “necessary” column, I lied to myself.

I mentally claimed the apron, and sulked back to my desk.

A few hours later, after finishing work, I returned to the dinner with my family and our gifted tickets (my boss gave us tickets to the dinner). As I made my way to the craft tables, I stopped to chat with a few of the members. My heart’s intent was to ignore all formalities and beeline to my apron. But, sigh. I mentally spanked myself over the fact that as I chatted, I was nearly having an out-of-body experience, my focus robbed by the obsessive concern that my turkey-print apron was still waiting for me, ready and priced. If it wasn’t… fine. Not meant to be. But if it was, and the price wasn’t ridiculous – that sucker was mine.

Chat chat, nod nod, smile. Disciplining my brain to respectfully remain in line with the conversation and not the craft table a few feet from me wheremyhusbandandkidsbrowsed while I chatty-chat-chatted. It was a discipline. I had to purposely tell myself to slow down.

Eventually, the conversation paused in a way that it does when both parties have small-talked enough and reached a comfortable conclusion. “So… I’m going to go check out the goods,” I said, generously giving the conversation an opening to discuss “the goods” if need be. Need did not be, other than a quick blathering from myself regarding the apron incident in the office, and my hopefulness that it was still there. Release was made, apron spotted, price accepted. Merchandise officially owned by me. I acknowledged the noticeable reduction in my stress level, after acquiring the apron. I, once again, accepted that I am a freak. 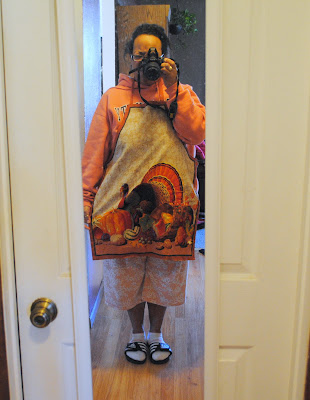 One thought on “The Turkey Apron”