Once again, I’m blogging daily from December 6 to January 5. Live with it. They’re using a slightly different system this year and I hope I can get the hang of it before the end of the Holidailies run, but who is to say. I don’t think I like it already, but maybe it will grow on me.

OK so pizza crusts in the bread maker– or rather, momma hasn’t done much of meal-planning since Thanksgiving and she’s flying by the seat of her pants. That’s probably more appropriate.

Wednesday I made a quick run to Costco while Sal was at goalie practice, and I worked hard not to buy for the sake of buying, but to be thoughtful in what I needed. Of coarse, that means I needed to recall just what it was I needed. Need, need, need. Noodle bowls. Ham. Shredded cheddar cheese… gum, sour cream, Sobe. I didn’t so much need the peeled baby carrots, come to find. But I picked up a HUGE bag anyway (sigh). I’ve been spreadsheeting it out to see what really IS a deal and what IS NOT a deal at Costco. So far it looks like I’m getting decent deals. Just don’t buy the vinegar there. Not a deal.

As I was walking the isles, I decided that I would be making pizzas. The huge bag of shredded mozzarella was calling me to make some pizzas and possibly a casserole. In the cart it went (I did end up making crockpot lasagna and I WILL post the recipe this week).

Back to the pizzas. Now that wrestling season has started (and winter soccer trainings, indoor soccer leagues), life has swung back into crazy gear again. The plus is that Frank coaches and all 3 younger boys are in wrestling at the same time. The not-so-plus is that Dante is just finishing up wrestling (for high-school, they use the same mats as the youth wrestlers), and needs to come home just as Frank is arriving with the boys for their mat time. That means I have to go pick up Dante. Before the youth wrestling started, I’d have dinner ready to go when Dante got home (ravished), and we’d all sit down to eat. Now that we’re on different schedules, it isn’t so easy. It’s only 2 days a week, though, that that happens, so I can’t complain.

Basically what I’m saying is, even though all the boys are occupied, it isn’t a real down-and-dirty “work time” for me because I’m running around in between cooking dinner. Last week on one of those days, I thought I’d be all Ms. Smarty Prepared and start a pizza crust in the breadmaker before I left, come home and start up some pizzas. That would have all been find and dandy had I not set the bread to “Quick Bake” instead of the “Dough” setting. 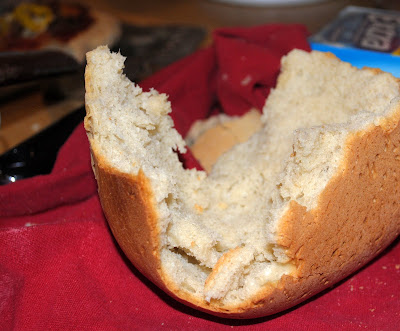 I didn’t actually realize that was the problem, not right away. I thought that maybe there was simply something wrong with my bread maker. I mean, it is a little bit on the older side. But I had made calzone dough in it not too long ago, so I couldn’t figure what went wrong and why my bread maker was so warm. The kids munched on the “bread” and said it was good (they were just hungry). I turned into Maniac Mom, panicking, stressing, hyper-cooking. Refusing to change directions. We were having pizza if it killed me. And it nearly did.

I worked on mixing up a dough that didn’t need to rise or be beaten, thinking that at least they could start on that, and if nothing else worked, their bellies would be satisfied. But, in tandem, I also put another batch of dough in the machine. Well, that’s not true. I intended to put a batch in, while the kids hovered, squawked and asked questions that my brain had to work to answer. Everyone asking me questions and getting in my way makes my head start to sputter and blow smoke. The distractions caused me to add the ingredients to the machine in a fashion that would have rendered yeast-less dough. I had to toss that batch.

Next attempt went fine, although I realized I screwed up the other no rise/beat dough, adding double the yeast. At this point I was about ready to glug down some spiked eggnog and go lay in a snowbank somewhere. Forget dinner.

The first pizza to arrive on the table was the no-knead. Pepperoni and banana peppers. No picture.

Second pizza was another no-knead (still waiting on the bread machine to finish its job). Italian sausage and banana peppers. 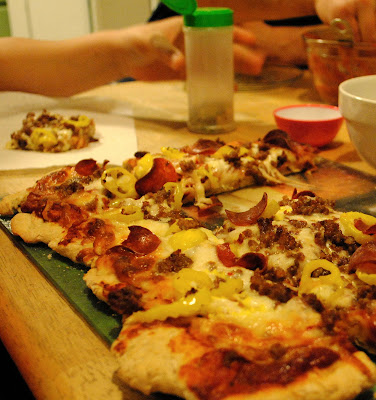 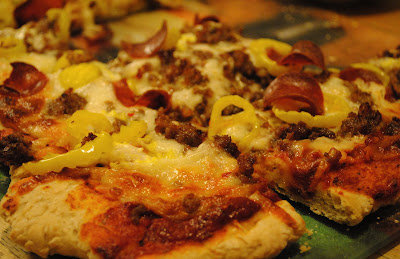 Third pizza was with the “regular” knead-and-rise dough, though I didn’t quite let it rise all the way because we were hungry and I was sick of playing pizza-maker. I used half the dough on 1 pizza and the rest I put in the fridge. 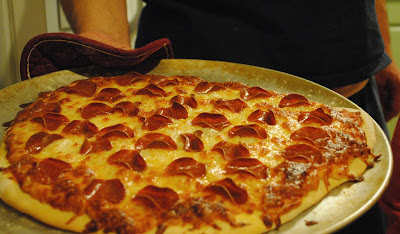 They were all OK, but I prefer the knead-and-rise dough. Frank liked the sausage and pepper one, but got horrid heartburn from it. Sal liked everything. They must have all liked the pizzas enough because what they didn’t eat for dinner, they ate the next day. Every time I make homemade pizzas I wonder why I don’t do it more often. Story of my life.

I made a breakfast pizza with the remaining dough. It was also a hit.

Again, Bowzer wondered when he would get his. 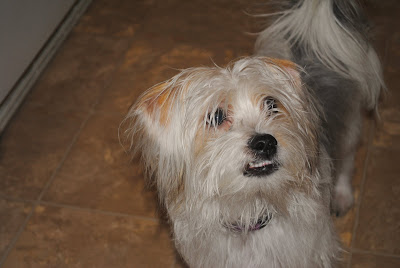 Don’t judge us because we don’t take our dog to the groomers. All the boys have long hair at some point.