Tonight the twins had a strings concert. It isn’t the first strings concert I’ve been to, but it is the first one they have performed at as old middle schoolers. I didn’t really have to push them to sign up for strings in middle school, it was rather a natural transition. They haven’t practiced at home, but they have not complained and asked to drop the course. I guess it is a happy medium.

See, I don’t command that the kids play, practice and hone an instrument, but I do prefer them to try it for a few years through school. OK, I forced them all to play strings in 4th-5th, and be in a music course in middle school.  All of the kids have played in strings for at least two years. So far, none have continued on much longer than that. Generally after strings, they are given a choral or band choice to try (middle school). After that, I don’t push it anymore. So, they were exposed for a period of time. If they come back to it, great. If they don’t… not so great. But I’m not going to ground them over it right now.

The twins are my only instrument players at this time, although Lootie is asking for an Ocarina for Christmas (HUGE Zelda fan, gets obsessed with and runs on obsessions every few years [learning Chinese, ghost-hunting…]) I was quite happy to go watch the twins play. Part of it was just feeding off their own enthusiasm. Sal has been talking about it since strings started, counting down the days in a rather casual but persistent manner. Franny was just excited to be up there playing in front of an audience.

As the day grew close, the boys started to plan their mode of attack, since their schedule was pretty tight. First indoor soccer game was the same day, directly preceding the concert. Both events were of major importance to the boys. The game, because they finally got to play on a team together; the concert because it is a performance for goodness sake. The plan was to pack their clothes, play their game (hopefully not get sweaty and stinky, even thought hey knew they would), jet cross town to school, and be ready to play at 7pm.

Story of our lives.

The request from the strings teacher was black pants, white shirt. Easy enough. Franny had a pair of black dress pants, Sal… well, I picked him up a pair of pants at Savers a few days ago and mom hemmed them up on short request. I left it to their responsibility to put their outfits together, make sure they had everything, and pile in the car for the game.

Here is what we ended up with: 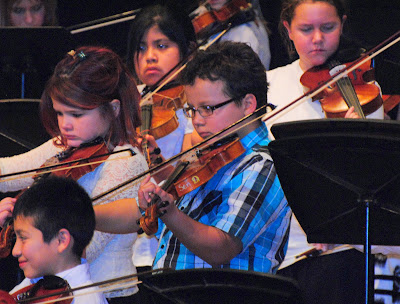 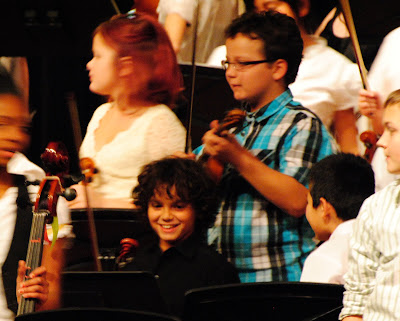 Whaddaya do? I was hoping there would be more screwball kids in the mix, but no. All white shirts, black bottoms. Except for one girl who wore tennis-shoe, knee-high laced boots that were black and white, and the rest of her clothing was gray. I could have been upset, but I wasn’t. We were there. They were playing. Having fun. Life goes on.

Sal, I noticed, didn’t look at the sheet music once and played all by memory (that’s how I was/am). I didn’t ask him, but I do wonder if he reads the sheet music or plays by ear. I could read, in a pinch, but playing by ear was my mode of learning. Franny, for sure, reads the music. He smiled and chatted with friends– at appropriate times — and did a little head-banging when they played, “We Will Rock You” at the end. They both got to bring their instruments home, something I did not expect. I requested a concert and a few tips. They played songs in their boxes. What a pleasant night.

I tend to get stressed out over things like this– what time will we get there, what about their messy hair, are they wearing the right clothes, will they play OK, can they leave early like the rest of the 6th graders, ohmysweedgoodness Sal is wearing plaid, should I be forcing them into lessons… on and on I can worry about all sorts of things. Last night I tried to just live in the moment, enjoy my quirky little freaks, and not obsess/worry about anything else; just enjoy.

It worked, for the most part.