I’ve been doing some meal-planning, freezing food and trying to use up some of the items in my pantry. It can be exhausting. Monday my legs were aching after shopping for my menu-plan, then making 4 lasagnes (two veggie, two meat – with homemade marinara), three taco pies and dinner on top of that (I don’t even remember what we had – oh yeah – grilled chicken and garlic mashed potatoes).  The kids came home to the wonderful smells and were disappointed that we weren’t actually eating any of the food that night. After whipping up the meals, I showered, went to the honors ceremony for Dante, and then came home to straighten my hair. By the end of the day I was SO ready to get in bed and read a book, but all I did was play a game on my iPod, zone out to trashy television, and fall to sleep.

Yesterday we were going to have soup, but in the midst of all my planning, I overlooked that the fact that I needed to have started my dinner much earlier than one hour prior. You don’t know how badly I wanted to order out pizzas. So very bad. Instead I grabbed a box of frozen fish and made fish tacos. It wasn’t a huge box, and I happened to also have 4 chicken breasts leftover from my Monday madness cooking festival, so I used that as well. I also had a bag of coleslaw. Perfect! I managed to fit time in for a walk, and then I dug into dinner.

The coleslaw I made to go along with the tacos was very good, I have to add. I made it almost exactly to the “T” but naturally had to adapt with what I had and what sounded good to me. Note: These horrid pictures are brought to you by the letters i-P-o-d.

Directions
Place everything in a large bowl except for the lime, sugar, salt and pepper. Mix. Squeeze lime over mixture, add sugar, salt, and pepper. Mix again. Let it sit in your fridge for about 20 minutes before eating. 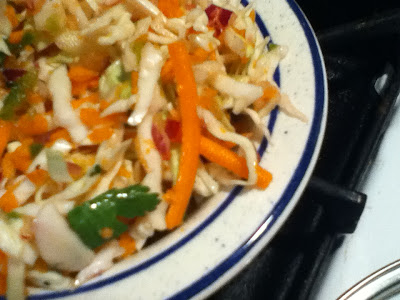 As a side, I made some Mexi-rice. It’s super easy and tastes yummy. Warm tortilla topped with half a fish filet and some slaw (I had sour cream on one, too) – add the rice, and yum.

Directions
Heat broth to a boil; add garlic, turmeric and cilantro. Add rice and stir. Cover, and cook for 15 min. or until liquid is absorbed (see package for directions). After it is done, turn off the heat and let it sit for 5-10 minutes (I usually remove the lid for 5 seconds to let some steam go first). Remove lid and fluff. Eat! 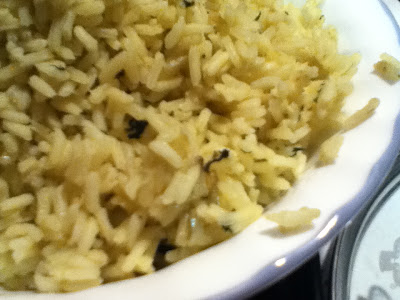 Pair this with a gin and tonic and you’ve got a delicious summertime dinner. Might not want to give the kids a G&T though. We ate our tacos, and watched the Brewers play baseball. Perfecto. 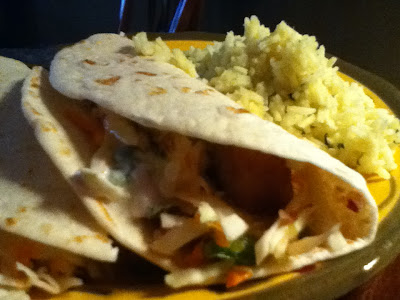 One thought on “Fish Tacos and Yellow Mexi-Rice”