OK, so today was the real deal, at least for us. Like I said, Dante had school yesterday, but he’s in college and staying in a dorm. This is different. The house has been buzzing since about 7pm last night while we were watching a Brewer’s game and a quite impressive storm rolled in. Lightening was abundant, flashing through the sky relentlessly, barely giving it time to go black before lighting it up again. This brought us to a closer huddle where we continued to watch the game, watch the sky, text Dante and, for a minute, feel like we were all together still.

The boys went to bed around 9:30pm, all of them, which was uncommon. But, having the next day be an “event day” helped. Naturally, Lootie started digging for his backpack, and other things that should have been done long (longlong) ago. Franny did a find job pointing that out to him. I didn’t have to say anything. OK I said a little, but not much. “See, that’s why I started planning my clothes and packing supplies loooooooong ago.”

To bed they went, tucked in and cozy, surrounded by muffled thunder. Once, thunder shook the house with a booming cry, and Carlito called out to ask if I had heard it. Yeah, yeah, I did.

This morning I set my alarm a little earlier just to get up and be of support to my new sophomore and 8th graders. They’re pretty self-sufficient in the morning, which is really nice. They had packed a lunch last night, set out their clothes and were putting on the last-minute touches when I made my appearance. Lootie was still in bed, since he takes a later bus.

I didn’t know if the twins would really want a picture, but they happily obliged. Both were a bit overdressed with the sweaters today (high of 82), but the first day of school feels like it should be a cool autumn day, I guess. 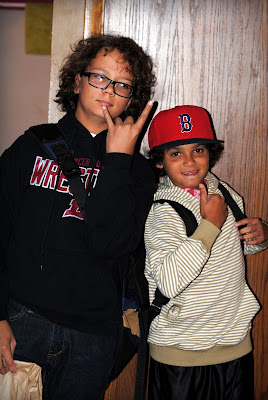 These are Franny’s shoes. I like them a lot. Not just because they are a sharp shade of red. But because I found them, on sale, while picking up some shoes for Dante. What I love is that they were half the price I was hoping to spend on shoes, just happened to be the right size, and Franny loves them. It just doesn’t work out that way very often. 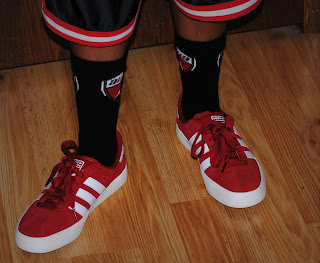 Lootie didn’t have the air of excitement that the twins had, but what can I expect? Last night he told me he felt like he was already in college. I don’t know what that means, really. Maybe it is because, while Dante is not here, he is the oldest boy, instead of the middle child stuffed between the one and only girl, and older brother, and a set of twins. Who knows. As long as it doesn’t mean he wants to drop out of high school, I’ll just go with the flow.

As he left I grabbed my camera. “First day of school picture?” I asked him. He made that groaning noise that commonly comes from a teenagers throat, but he turned long enough to roll his eyes and give me the opportunity to snap ONE picture. 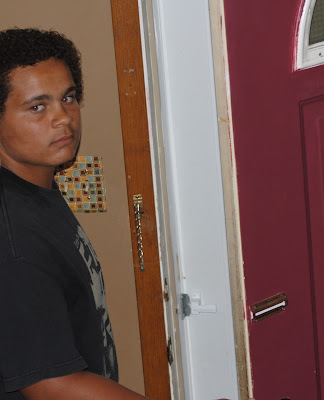 I can’t help it, I always feel a bit sad. Lonely. I relish the house to myself (as I think we all do in our family since it is small and there’s so many people in it) for short periods of time, but I also take great comfort in a busy, stuffed full home, loud with my freaks, rooms alive with energy.

It’s strange having Dante off in another town, doing his thing, and not being a daily part of the circle. It feels not normal. I’m accustomed to Sophia being gone because she’s been gone for years. Even as a teenager when she was here, she wasn’t really here. She was always trying to get away. As a mom, I wonder when it starts to feel normal not putting a kid on a yellow bus to elementary school. Ever? Those days are so crisp in my head, while others are blurry.

I had grand plans for today, but am fairly certain 90 percent of that will not come to fruition. At best I’d like to freeze the black beans I have simmering in the pot since last night, take a shower, make a couple calls. Possibly go grab some notebooks, get dinner ready, freeze a couple meals. It is also double coupon day at Copps. I’d like to hit that.

Or shower, lounge in a chair, read a book.