A lot of people are doing the “Thankful Thirty” this month, and I contemplated doing it, but frankly I don’t blog, tweet or facebook enough to manage. I suppose I could do it online in my paper journal. As I type this out, I realize I probably should simply for discipline’s sake. It is good to be thankful, to pick out the positive, and to massage the optimist within. It’s healthy.

Last weekend Frank had off. We went and watched Dante wrestle (his first ever college matches). It was an exciting, nerve-wracking experience. My heart swelled with pride, but also of longing. I miss my college-aged son. In the same breath that I “miss” each child, moments, segments of life that hang in time– I enjoy the dynamic that new life phases bring. It is exciting to watch my older two young adults take on life, figuring out who they are. A bleeding, swelling heart. Again, I am pushing and pulling each and every day of my life.

Saturday was spent in the car, driving hours away to watch the matches; Sunday we took to the outdoors and explored a local spot that we’ve visited before, but always in winter. 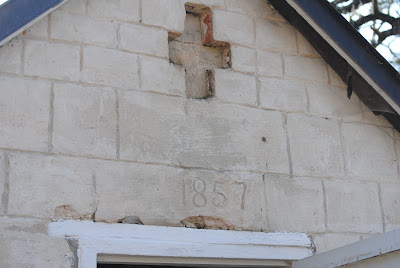 There is a small chapel on the land that was once a farm, now a public park. The owner agreed to donate the land as long as the chapel stayed. We’ve been there many times (almost always after dark), but have never seen the chapel. The hike up brought muscles to warm on a steady incline. On a peaceful day the chapel at the top and the view surrounding would have been the first slice of fresh air on a nice trek through some very manageable paths. But on that day it was laden with Boy Scouts who were on a treasure hunt, and weekenders on the same mission as we were. Inside the chapel, a Scout poked at one of the statue’s heart (a saint) saying, “Ewww. Ugggggggggly. Look at that heart.” He checked off something on his list and they ran screaming to the overlook. Kind of killed the moment. 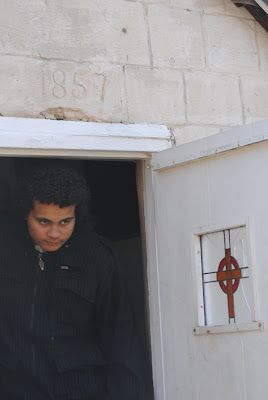 The chapel is small. 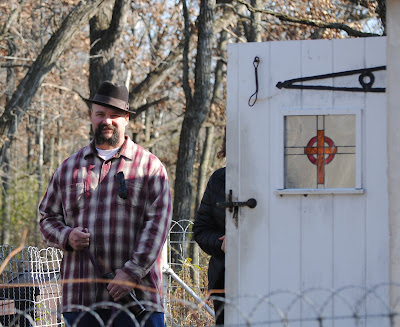 The boys felt our hike should have ended there. They were wrong. 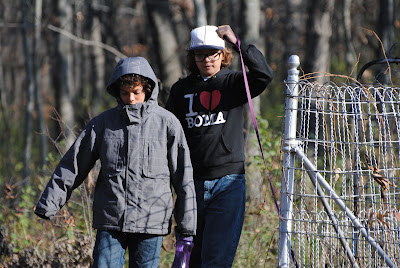 Franny created his own path down the hill while the rest of us took the same route to return to the fork in the path. Sal was overly concerned that we would have search parties to find his twin brother. 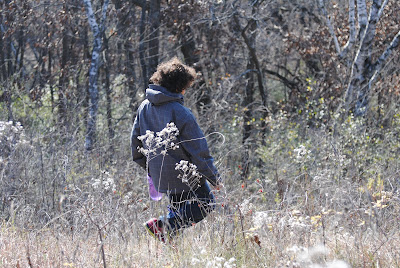 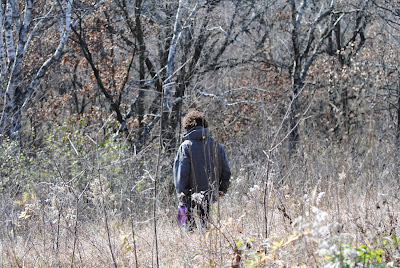 We found a spider that was definitely not indigenous to the land. 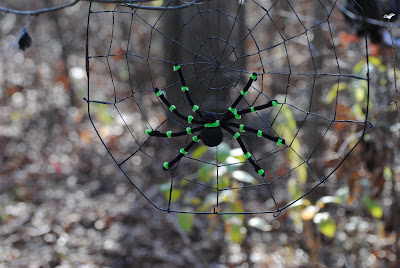 When we came to the bottom of the hill, we took another trail that we figured would take about a half hour and bring us back to the beginning. Half-way through, we came to the warming hut where we have our winter picnics. The boys were spent and wanted to head back using the familiar route. I asked them a few questions to determine that they knew where they were going, and told them to go that way and we would meet them back there. Frank and I wanted to explore new territory. 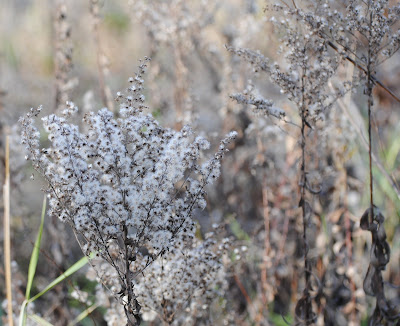 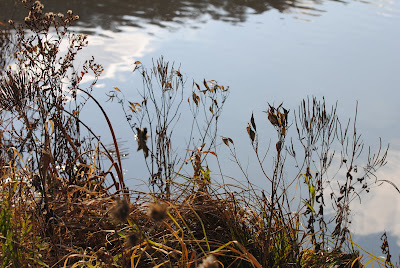 After walking to the lake, we were faced with going back to the car through the prairie, or to retrace our steps back through the woods. We chose the woods. I’m not much of a prairie person; I like the hills hidden in the trees.

I posted the picture below on Facebook, too. As we trotted down the hill, I heard a noise that I thought was a branch falling. But it was this man, coming up behind us with his poles. He breathed a chipper greeting when he passed, and continued on his healthy clip right past us, generating more steam as he pushed up the hill. Inspired, I challenged Frank to run up that last hill with me. He shook his head. I started, and the dog (who Frank was leading), took off behind me, forcing him to join in. 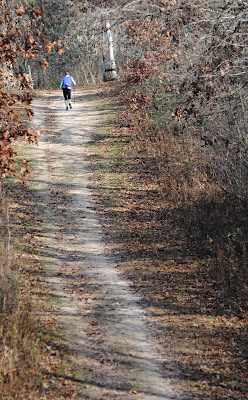 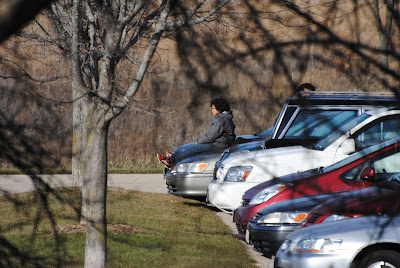 The kids were waiting, taking in the view, some more patient than others. 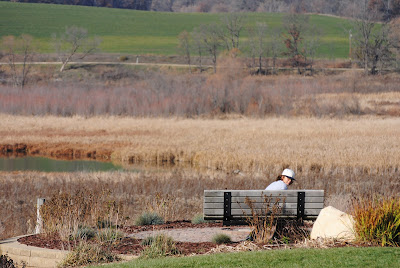 I sat with Sal on the bench, and we ate our cheese sticks. I didn’t want it to end. Time is short. Every age and stage in life is different. A Sunday hike with a 13 year old is different than one with a 15 year old, as it is different with one that is over 18, or under 8. I can’t say that any is better or preferred. They are all good. They are all something to cherish.