Supposedly this recipe is all over the internet, but I don’t recall seeing it until yesterday. I was immediately intrigued. Pancakes with only two ingrediants, eh? I guess it is Paleo, though I’m not too familiar with that, so I can’t claim it. It is a simple, no-frills breakfast, allowing for protein and fruit. I’m all in.

There are different ratios, but I went with the simple 1:1. 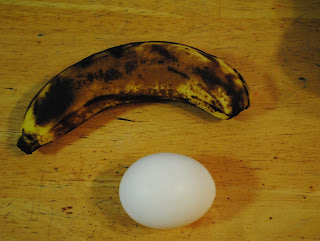 I was going to just make 1 batch, but instead I used the 3 black bananas I had and tripled it. I’m glad I did. It was genius  Maybe somewhere in the back of my mind I knew I would fail a batch, and need more to work with. In retrospect, pancakes (for me), generally start with one failed ‘cake, and the rest are beautiful, so this worked. 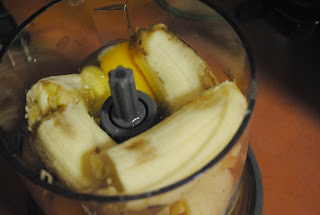 So I took my eggs and bananas and put them in my Ninja. I was going to just use my favorite little chopper, but the more I use my Ninja

, the less I use my old faithful chopper. Kind of sad. I feel like I’m cheating on it. 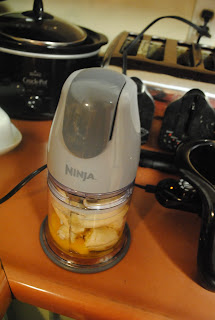 Most people tend to mash theirs by hand – but I thought blending it to a liquid would be better. So I did. People also talked about adding baking powder and such to it – but I wanted to keep it simple. A true Two Ingredient Pancake.This was difficult for me, because I tend to like to experiment. But without starting with the simple base, you never know if your experiments worked. Beyond that, the verdicts for additions to this simple concoction weren’t too outstanding.

I do not like how precariously that is sitting on the edge of my counter. It didn’t fall, but just looking at it makes me think it will. 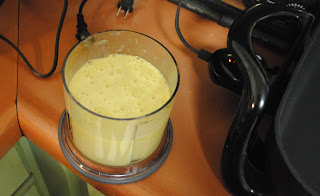 I heated my skillet to 350. I didn’t even bother with my beloved iron skillets because they aren’t the best behaved for me with pancakes, with their reputation for sticking. I didn’t want a bunch of added oils, either. 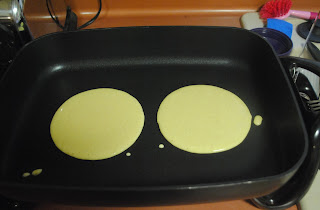 A few minutes later the edges looked like they were firming up. I tried to flip, and it gave me the whole accordian pancake look, like, I’m not ready. Soon there was a smell that one can only associate with food burning, and I had to flip it. 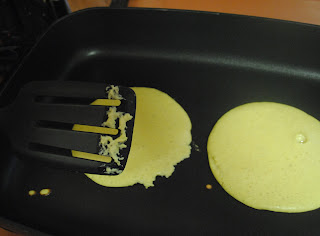 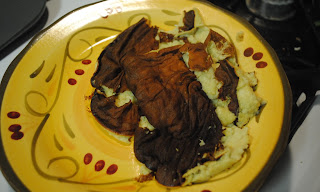 Batch #2 I decided to turn the skillet down to 250. I read a tip about cooking a bit longer on lower heat, and that working better. I also used some non-stick spray. (I need to find and link to that blog, because she posted some very helpful tips… here it is: secrets to a perfect two-ingredient pancake.)

One worked great. Smelled great. The other, not so much. I think I was a bit jumpy on the gun. Out came my ipod timer. 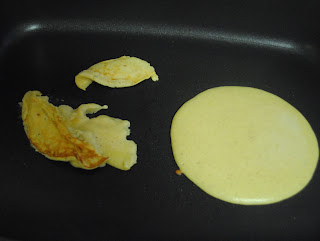 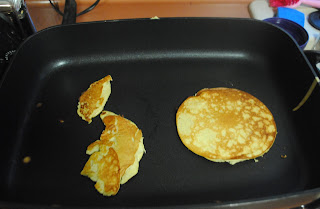 Set the timer for 5 minutes to force my patience. That was the PERFECT amount of time, only I forgot the dang spray -gah- and had an issue… again. But they were cooked enough, and I saved them regardless. I ate one from #3, putting it on the bottom and topping it with the pretty one from #2. Spread a little peanut butter on them. 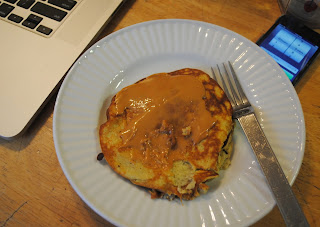 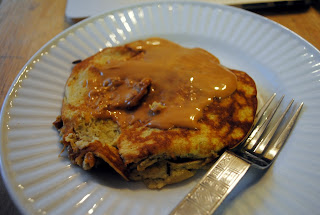 Verdict: Pretty good. If you don’t like bananas then skip it. If you’re not much for bananas and peanut butter (I’m not, even though I ate it happily) – try syrup, jelly – or nothing. Mine were way sweet enough from the over-ripe bananas. Syurp would have been too much for me. As I ate them, I wondered if sweet potatoes would work in this kind of recipe. Hmm.

They weren’t light and fluffy like a pancake. They were actually a bit gooey, which is how my husband likes them. Kind of crepe-y. I liked that they were warm, and something different, had no egg and no flour. I’d like to make a few and see if they will hold to nuke on mornings where I don’t feel like making anything, and want something warm.

I think I would try these again for something different. They’re less than 200 calories and a relatively quick breakfast fix. A little vanilla in them might be nice. Or not.