It really is nice when I have a day off of work and have an idea of how I am going to spend my time. So much time I waste, honestly. I don’t mean that I need to be running around like a chicken with her head cut off; that’s not good, either. But I feel like many times I go full speed ahead, and then need just as much time to recuperate. I’ve always been more of a short burst, sprinting type of person. But that’s not always good for you. So, on days like this when I have sort of a “map” of what my day looks like, I can breathe a little more.

The wrestling season (in high school) is at an end. The city banquet was the other day. Lootie won All-City title at 195. He was very pleased with this. We were all proud of his accomplishments this year. I still smile when I think of his phase of not wanting to touch people (how you accomplish this as a wrestler, yet to be determined) for an entire year. It led to him getting beat more than he’d like. He got over that, and has enjoyed the sport ever since.

Here’s the team. A good group of kids. 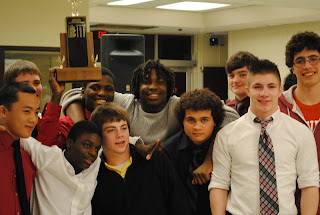 Lootie, after one of his matches, wearing his new headgear that wasn’t quite adjusted accordingly yet. Thankfully it didn’t cost him the match. 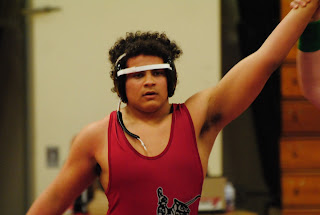 Sophia was over yesterday with some boyfriend drama (really wish she didn’t bring it here), but after the initial blowout of emotions, we sat down to some of Lootie’s favorite soup (Italian Sausage Soup, AKA Olive Garden Zuppa Toscana Soup, just her and I, and chatted.

We chatted! I’m sure many people chat with their 21 year old daughters, but it’s been a rocky road for us. Chatting about simple things can even be taken for granted. I didn’t even realize we were chatting about books and friends and soups – and not jobs, boyfriends and other stressful topics. I’m really thankful for that chat. I needed that chat.

So Carlito informed me that I will be making Whoopie Pies for the team banquet tonight. I made them this summer for Dante’s graduation  Now I realize I never even posted them here. That’s how often I post. Ahem. Anyway, he requested those, here are the ones I made this past summer. Our school colors are cardinal and gray. 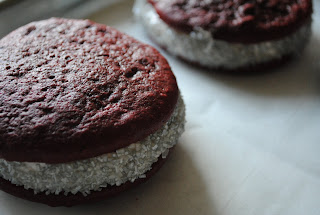 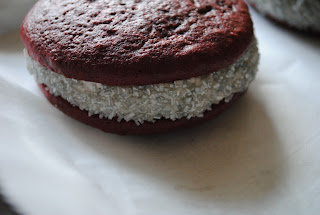 (LATER) The ones above looked better than they tasted, in my opinion, but the kids loved them. This time I made them with less filling and no sprinkles. They were still gobbled up. I couldn’t seem to bring myself to eat one. I tried a bite and that was enough. I haven’t had much as the way of sweets go lately. Mostly chocolates, a McDonald’s cone, or a Skinny Cow sandwich. These weren’t on the top of my list to eat.

The banquet went well and everyone had a nice time. I can’t believe it is another season gone by for Carlito. Since my parents retiring and moving and Dante graduating, I still feel like I’ve been catapulted forward through time on a continual basis. Now the twins will be moving on to high-school in a few short months and what-what?! Even Carlito will joke saying, “You guys are going into 7th grade next year, right?” They ignore him.